It was open mic night at the Comedy Club, and nothing was working for the aspiring comedian. He picked up the audience’s disapproval which made him even more nervous.  At one point, his gesture contradicted his story, and the audience laughed at the incongruity. As he came off the stage, the manager said “I’m sorry”.

The comic responded “Sorry? Didn’t you hear them?  I got a laugh!”

Sometimes, success comes in small doses.  As an independent author looking to find a buyer to the screenplay for my novel Love Is Never Past Tense, I find myself in interesting and unexpected places.

On the evening of July 26, over 100 filmmakers converged on the Gateway Film Center for the kickoff to the local 48 Hour Film Project. My team, led by TJ Cooley and Lewis Gordon was one of dozens of film crews that had signed up for this two-day event.  At 7.00 PM we were drawing our assignments.  By 7.30 PM we were racing out the door. We were one of 48 teams that showed up two days later with a completed film. 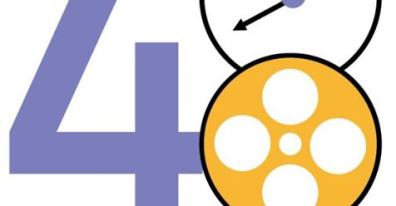 My friend Lewis Gordon is an officer of MOFA (Mid-Ohio Film Makers Association). He was part of the writing team for my screenplay, so I encouraged him to enter the contest. I figured that at a minimum it would develop connections to movie people that might help. He agreed if I stepped in as Executive Producer.

The 48 Hour Film Project is a grueling (yet fun) race to write, shoot and deliver a seven-minute film in two days. Teams enter local contests all over the world, drawn in by the line ” What could go wrong?”

Problem one: penciling me in as Executive Producer…  What does EP do anyway? High on the list of duties is finding a Director to take on the project, and I had already done that. Lewis sweetened the offer by suggesting that my book be included in the film. With that, we struck a deal.

Every team was given the requirements used to prevent getting a head start.

Each team drew genre assignments from two lists. Our team drew the genres “Family Film” and “Musical” – we could pick either or combine them. Lewis and his writing/directing/producing partner TJ Cooley spent a sleepless night putting together a screenplay. By 7.00 AM, cast and crew showed up ready to work. That’s when I discovered…

Problem two: I had been written into the script! Do EPs do that? Apparently, sometimes they do!

The work on our Family Film began in earnest. If Family Film and Musical bring up an image of The Sound of Music for you, scratch that and think the Sopranos. Yes, we made a gangster family film!

Problem three: In mid-afternoon, with the clock ticking, a camera failed.  Rehearsals and rework went on while another camera was shuttled across town. By early evening, filming was done and the focus shifted elsewhere for editing and production.

Problem four: About 7.00 PM Sunday, I saw a Facebook post of our “delivery” car stopped in traffic.  In the end, the car and the film made it to the delivery point on time, along with 47 other contestants. Two weeks later, all of them, including our masterpiece A Kill of Her Own got premier screenings at the theater where the madness began.

Problem five: Although we filmed the book in a couple different places, the angles were 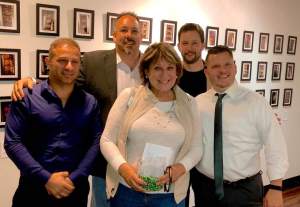 After the Screening at Gateway Film Center, August 10 2019

picked to move the action along — the start of my book’s film career ended up on the virtual cutting room floor. You can see the result of our work on YouTube. You won’t want to miss the last few seconds of the film.

A Kill of Her Own is now at the mercy of the judges. If it wins, it goes to the next level of competition and could help us get attention for the Love Is Never Past Tense screenplay. Sometimes success comes in small doses.

Shop for Love Is Never Past Tense

Today, I am talking with Valerie McCaffrey.  She is a producer and Casting Director in Hollywood  with dozens of film credits.  She  recently shared her new project with me, and I decided to introduce it to you.  In light of the current events it’s hard not to mention that Valerie is the third generation of immigrants to the US.

I want once again to stress the point that people come from other countries not because they just decided to take another trip, to forget their culture, their social level, or to leave their friends behind.  Those who are lucky not to have this experience need to know that it takes a lot of courage to go through these tremendous changes and adjust to a new culture.  Valerie is an example of how immigrants, even generations later, contribute to their new culture that in time becomes native.
We have a common interest in socially relevant stories, which is why her latest project touched me. If you are interested in seeing films that matter produced, I hope you’ll join her Indiegogo campaign mentioned at the end of this article.
Please meet Valerie!

Valerie, when we met at the Columbus Film Festival you shared with me that your grandparents are from Armenia.  What was the reason that they left?

My grandparents are survivors of the Armenian genocide in 1915. Religious profiling happened both in the Armenian and Jewish community. It was horrific.

Dirty Bomb is a Jewish prisoner trying to survive, but in the end he secretly saves the lives of others by sacrificing his own. I want to tell that story.

So, tell us about your latest film project.

“Dirty Bomb” based on a true story… Signing his own death wish, a Jewish concentration camp prisoner sabotages the construction of the V-2 bomb against the Nazis, while American soldiers struggle to advance against the Germans. 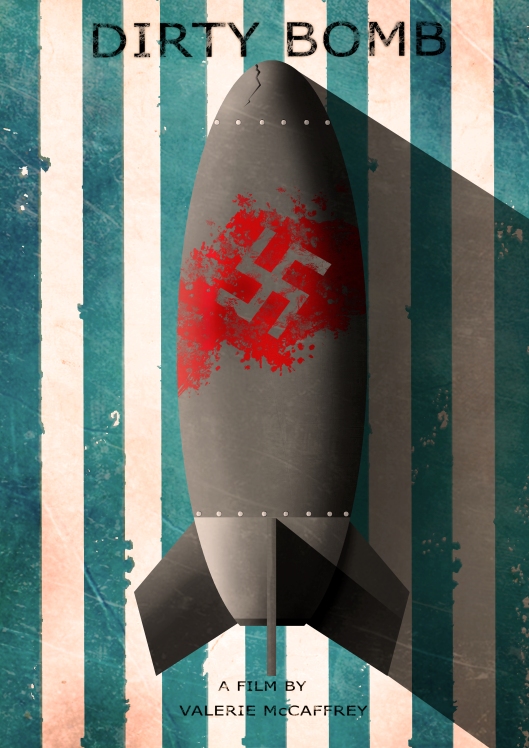 There are so many stories during the war, this one is essentially unknown. I want to bring them to life and light.

Here is a very little known fact: Werner Van Braun, who designed this V-2 missile, designed the Apollo 13 space shuttle. Hitler took advantage of Van Braun’s passion for space travel, which ended up killing thousands of soldiers while 200 Jewish prisoners were hung for the sabotage causing the bomb to misfire.

How will you promote the film?

I plan on doing a festival run and develop into a feature. Whiplash was developed that way.

Where and how do you plan to distribute it?

Who is involved in the project?

Bob Shaye, former owner CEO of New Line is one contributor—he is our Associate Producer. We have wonderful actors such as Ido Samuel from “Fill the Void”, (the largest grossing Israeli film in the US) Christopher Heyerdahl from Twilight, J. Michael Trautmann from Shameless.

I understand the current phase is being paid by crowd funding?

Indiegogo is a site where crowd funding makes things happen and making this short film, is one of the many projects Indiegogo supports.  The goal is to get the community involved in this  project— they believe in it and support the story. Each project has a deadline to raise contributions. Our end date is February 28. Here’s a brief video that explains it all. https://youtu.be/CypSN8Het3Y

What’s the goal for this Indiegogo campaign?

The goal is to raise enough money to create/build the concentration camp and tunnel where the V-2 bomb was built. I want to develop this story into a film. There is interest now.

How can readers get involved?

Readers can contribute money to make it happen. Even from $10.00 on up-anyone can be involved and receive a perk from the movie!  As the film begins shooting, we will keep everyone in the loop on the progress.  It will be everyone’s film.