My dear friend across the pond and fellow independent author Christoph Fischer has stopped by today for a chat. This was interesting because a lot of his writing, like mine, features people struggling with real historical events in a time of crisis.

Christoph was born in Germany, near the Austrian border, as the son of a Sudeten-German father and a Bavarian mother. Not a full local in the eyes and ears of his peers he developed an ambiguous sense of belonging and home in Bavaria. He moved to Hamburg in pursuit of his studies and to lead a life of literary indulgence. After a few years he moved on to the UK where he now lives in a small town in West Wales.  He and his partner have three Labradoodles to complete their family.

What is your latest success, Christoph? 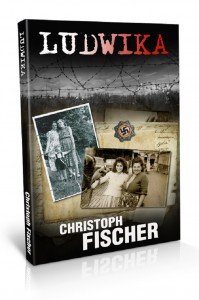 My latest book “Ludwika” . It has just reached #14 in a poll of best Indie Books and since its release in December has been downloaded over 60,000 times (during a free promotion) with over 200 reviews on Amazon with an average rating of 4.3 out of 5 stars. The success of this book has really taken me by surprise.

Give us your thirty second elevator speech – or is it a “lift” speech?

It is the story of a Polish slave worker in Nazi Germany and is based on a real life. Ludwika was forced to abandon her family in Poland and spend the war years in Germany. It was my idea to tell the story of a different type of victim of the holocaust. We all know about Auschwitz but there are many more stories to be told of how other people were affected by the politics. People who have read your book “Love is Never Past Tense“ will be familiar with displacement and falling victim to circumstances beyond their control. Like your book, mine is biographical, yet fictional, to make it more palatable.

What topics do you write about? How did you get started and how long have you been doing it?

I write about topics that interest me, be that a moral dilemma, a family crisis, a disease or a specific historical event. It always starts with me doing research on the matter and gradually coming up with an idea for a plot. I started writing back in 2010 and published my first novel in 2012.

You write historical fiction, contemporary fiction and thrillers. Is there a common thread?

Only my personal investment and interest in the topics. Unless I am really ‘into the subject’ I won’t finish the novel. Alzheimers’ Disease, Gambling, Spiritual Healing, the Finnish Civil War – these were all issues that really fascinated me. I know authors with a more specific formula tend to do well but, for better or for worse, I am not cut out for that.

How do you distinguish the historical fiction you write from historical romance, which is a label you don’t use?

To me a historical romance is primarily a love story set in a different time. These books may well feature a lot of historical information but the romance takes centre stage. The better ones of the genre, like yours, not only tell a love story but show how history affected that love. Many of my characters experience love, but their believe systems and fate are changed more by the historical events than their love interests.

Your books are set in the context of real historical events. How do you balance the needs of the story with the history?

That can be a tough and dynamic balancing act. The ideas for my stories are usually born from a ‘what if’ scenario, such as “How would I be affected by this event if I were…?“ etc.  While I write the first draft for each novel I have a timeline of important historic events and since these cannot be changed, sometimes the story must be tweaked. The conflicts between characters and history become clearer during the first draft and that often requires re-thinking of the original plot ideas anyway. I actually enjoy this process because it makes me ‘live’ the story with my characters in a small way.

Other than West Wales where would you choose to live and why?

Somewhere warm by the ocean, like Spain or Greece, Thailand or the Caribbean. But then again I am an uptight North-European and get on better with people from the cold countries, so I will stay put.

If you could pick a time and place to live where and when would you choose?

The here and now. I only moved to Wales a year ago and absolutely love it. I think that although we face a lot of challenges, we humans never had it this good. I worry about many things that aren’t right but I also believe that good progress is being made; in medicine, science and humanity.

How would you describe your target reader? Do you have different readers in mind for different genres?

My target readers are regular people with an open mind and broader interests than just fast food and TV. People who like to be entertained and don’t mind to learn a little how history or mental health for example can affect someone’s life at the same time. I must confess, though, that I don’t ‘write to please’ but I write as the characters and story dictate it. I think writers need to be authentic to their vision rather than trying to meet formulaic expectations.

My target readers are regular people with an open mind and broader interests than just fast food and TV.

Your latest work, Ludwika, has done well in competitions. What inspired you to write it?

I helped a friend with ancestry research. He needed a native speaker to contact archives in Germany to find out about his mother’s time there during WW2. I became fascinated by Ludwika’s life and wondered why she made some of her decisions. The “how could this has been” led to some additional research and reading. I didn’t want to write about it at first because this time not only were the historical facts a stubborn framework, but also the actual events in Ludwika’s life. In the end I couldn’t get her out of my head, though, and started writing. When the family approved of the story I decided to publish, mostly in the hope that using Ludwika’s real name and story might help my friend to reconnect with his Polish family.

Do you have a favorite story about one of your books?

I received an email by a woman about the house I live in. She wanted to know if I lived there. I was puzzled about this unusual question and reluctant to speak to her at first, wondering what she wanted from me. When I spoke to her a week later she told me that she had come across my name and my novel “Ludwika” while researching her family roots in Poland and that my book had helped her along with her own research. Her further probing into my background then proved that I not only had organised a book fair in her very hometown in Wales but also lived in the house where she grew up. Small world… Her father’s ashes were scattered on my property and she wrote how comforting it was to know the person who now looked after it.

Are there any recent events that look book-worthy to you?

Sadly far too many. What goes on in the Ukraine, the annexation of Crimea, the war in Syria and the refugee crisis….

What projects do you have on the horizon?

My novel “African August” is soon to be released as part of a charity anthology in aid of the Santa Paula Animal Rescue Centre in Calfornia. It is an adventure story about a man spending time in Africa, torn between his desire to do good and to live life to the full. I’m working on two mystery novels at the moment. One is the sequel to “The Healer” and one is a comic mystery set in rural Britain. I’ve got an idea for another historical novel but am not sure when I will find the time to write it.

My novel “African August” is soon to be released as part of a charity anthology in aid of the Santa Paula Animal Rescue Centre in Calfornia.

You were born in Germany but have lived in Wales for some time. Do you have any thoughts on the Brexit vote you’d care to share?

I personally regret the vote deeply. I believe strongly in a United Europe and see myself as a world citizen. I thought we were moving towards a global humanitarian society without borders, exclusion, nationalism and separation. Instead the world is heading towards populism, short-term thinking and division. I feel the vote was made out of anger and often hate and I don’t believe that the voters will get the results they were hoping for. No country is an island any more in our globalized world.

What is your life outside of writing?

I live a quiet and harmonious life in rural Wales with my partner and three dogs, fish, birds and sheep. I have a garden to take care of, I do a lot of exercise and try to be outside as much as I can. I still read a lot, books and magazines, and have a busy social life.

What makes you laugh?

Thank you so much for visiting my blog.  Hope my GPS will take me to Wales one day!  Meanwhile, where can readers find out more about you and your books? Hope they will enjoy and learn from them like I did!