Crimea is one of the most beautiful places on Earth… Crimea, with the stroking blue-green waves of the Black sea… Crimea, with its dormant volcano Kara-Dag. Crimea, where people gather for vacations, enjoy the fresh air, the pebble beach, the smell of the sea weeds in the coastal breeze… Crimea, where people meet and become friends for life, where they play guitars on the shore under the starry sky, where they listen to the music, fall in love, and carry back home memories that last for life.

The thought to leave my country came while I was in Crimea, when events in Moldova and Chechnya were evolving as they are evolving in Ukraine now.

The days flew cheerfully in Koktebel. In the evenings we gathered at Anna and Vladimir’s home, local residents who provided simple living for people on vacation. We sang songs with a guitar, told jokes, laughed a lot, drank plenty, and ate heartily.

“It is time to split.” Boris said.

“You’ve only arrived! Why do you have to leave?” I asked.

“But not in this sense …” Boris stretches his words in thoughtfulness. “There is no place to come back to, as a matter of fact. Before our departure from home, someone scratched a cross on the door of our house…”
(From the book Love Is Never Past Tense) 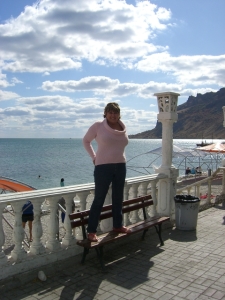 I got a chance to go back to Crimea a couple of years ago where the Russian version of Love Is Never Past Tense was published. In the picture: Koktebel, Crimea. Kara-Dag is on my left.

It was the same Crimea, like it was years ago—but at the same time it was not. I tried to compare my feelings to the ones I had there before, but I could not.  The same sea, the same sky, the same horizon…  What made it so different?  And it struck me: dogs!  Hungry dogs in the streets all over.  They can run into you even on the beach. “Where are all these hungry dogs are coming from?” I thought.  I hardly passed a grocery store without buying another kilogram of hot dogs to help hungry animals.

Near a side wall of one store, I noticed a little mommy-dog with several, maybe one week old puppies.  She looked at me with such pain!  She was hungry.  So were her babies.  I dropped three hot dogs in her mouth, one after another. They hit the bottom of her stomach without being chewed.

I thought “who will feed these guys tomorrow?” I returned to the store and asked the sales person to feed the doggie for the next two-three days with my hot dogs. She agreed and I handed her the whole package.  When I shared this story with a Crimean friend, the reply was “The sales person will take the food to her kids.  She will feed them first.  Forget about your dogs…”

Now, tanks are rolling down the streets of Crimea, trying to “enforce peace”. Can peace be enforced? Let’s hope that agendas will merge! Let’s hope a vision will be shared!

Flags on government buildings come and go. Perhaps this is why peace is less reliable…

Wishing you peace in the coming spring!

Love Is Never Past Tense

Buy it on Kindle

4 thoughts on “Spring comes by itself… Peace is less reliable… Spring in Crimea, 2014”